Peugeot has unveiled its new 408, betting the fastback design will attract consumers suffering from SUV fatigue.

SUVs have been hugely popular in recent years in Europe, reaching a record 46 percent share of new sales in France in May. but Peugeot believes their ubiquity has created a yearning among some drivers for more originality. "(Some Peugeot 408 customers) wish for a more original and innovating style than a compact SUV, which they deem too common," the brand said in a statement. 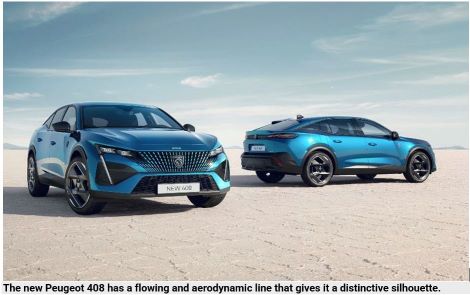 Fastbacks are known for a single slope from the roof to the rear of the vehicle, as seen on the rival Ford Mustang. The new 408 is much lower and longer than Peugeot's 3008 SUV, with a flowing and aerodynamic line giving it a distinctive silhouette that sets it apart from mainstream models.

However, the new car, which will be built in Mulhouse, eastern France, does have some popular SUV characteristics such as a high ground clearance, big wheels and black plastic cladding on the fenders, sides and back of the compact.

The 408 will be launched early next year in Europe. It will arrive by mid-2023 in China, where it will be assembled in Chengdu.

It will initially be equipped with gasoline and gasoline-electric hybrid powertrains before switching to a full-electric version.