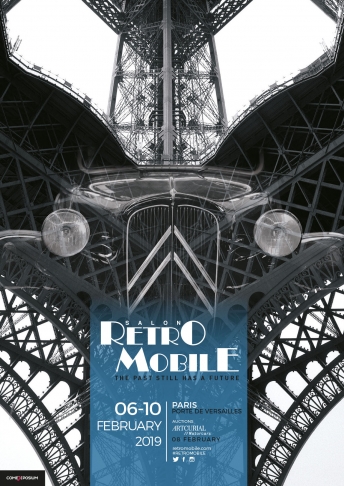 Billed as the premier salon for those with a love of old cars, this is a great show to attend. L’ Aventure Peugeot always bring cars from the Museum and the many French clubs put together a magnificent display of Peugeots, not to mention all the other marques that are on display.

With all the trauma of what is going on the UK at the moment I was looking forward to this year’s Retromobile more than any in recent years if it was only to immerse myself in my love of cars and being around like minded people! I met up with Rob King and Ian Helme at the show on Thursday afternoon with Alastair Inglis joining later in the evening. We decided quite quickly that any mention of the “B” word would be banned for the duration of the show!

From a PSA Group point of view 2019 was all about the 100th year Celebration of our sister Marque Citroen. I have to say that the Museum stand and the Citroen brand stand were outstanding in representing Citroen through Concepts from The Citroen Conservatoire to owner`s vehicles being exhibited on the Museum stand. However the really outstanding display was that of a collector who brought the most Henri Chapron built cars I have ever seen in one place. It was a truly fantastic collection.

As you walked into the exhibition halls the view was dominated by a 5 metre tall and 5 metre wide Berliet truck that was used in the deserts of Africa. It looked to me as if you could invade a small country from the rear bed it was that big!

The Halls are now spread out over several areas (some of which are in a different arrondissement!) but all are full of exciting and rare exhibits. In the Dealer stands selling cars I saw a Mercedes Gullwing that had been in a rear end accident and just put into storage for 40 years unrestored. That car had a sold sticker on it on Thursday morning when I entered at 8am! Other outstanding stands were that of Richard Mille who had an exhibition of McLaren F1 cars, the Lancia stand with several Stratos models in a line and a display of Lamborghini Miura from the first prototype to the very final one off the production line.

At this point I have to mention the Peugeot display which for the reasons I have already mentioned seemed to me to be a little low key. Don`t get me wrong the cars on display were beautiful and were a credit to their owners but the stand out vehicle was the E-Legend which having seen it in the flesh is totally stunning from any angle inside and out. The nods that we have seen to the 504 Coupe in pictures go nowhere in doing the actual car justice. We know about the exterior similarities but the velour interior is more or less a replica of the trim in the original 504 Coupe. A fantastic car. On the 205 GTI Club de France stand (in the other postcode) they had a unique Ming Blue Ph1 205 1.6 GTI which was absolutely delightful.

Overall I had a great time and my thanks go to Rob, Ian and Alastair for their company and sharp witted comments which made this year`s Retromobile so memorable. I am already thinking about 2020, God willing and of course if our neighbours are still talking to us! Damn I mentioned the “B” word once but I think I got away with it.